The Root Bridges of Meghalaya

I have been corresponding with Bremley W. B. Lyngdoh, PhD of Worldview Impact over the last several weeks as part of my coursework at UCLA Anderson as well as my general interest in Social Entrepreneurship. Bremley recently sent me something that I’d like to share with his blessings. Please read and enjoy.

I just wanted to share a little story with you of how our ancestors planted their trees on our native land 500 years ago.

Remember in the movie Avatar the Colonel says – You are not in Kansas anymore – You are in Pandora – Well our homeland is like Pandora. In the depths of Meghalaya northeastern India, in one of the wettest places on earth, bridges aren’t built – they were grown 500 years ago by our ancestors. One special root bridge, believed to be the only one of its kind in the world, is actually two bridges stacked one over the other and has come to be known as the “Umshiang Double-Decker Root Bridge.” http://rootbridges.blogspot.com/

These living root bridges are being used daily even today by our people living in many villages around Cherrapunjee. You may have seen some of these similar looking hanging bridges in the film Avatar where the Na’vi people jump one tree to the other. 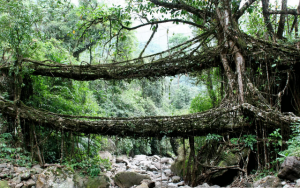 In order to make a rubber tree’s roots grow in the right direction – say, over a river – our Khasi people use betel nut trunks sliced down the middle and hollowed out to create root-guidance systems. The thin tender roots of the rubber tree prevented from fanning out by the betel nut trunks grow straight out. When they reach the other side of the river they’re allowed to take root in the soil. Given enough time a sturdy living bridge is produced.

The root bridges some of which are over a hundred feet long take ten to fifteen years to become fully functional but they’re extraordinarily strong – strong enough that some of them can support the weight of fifty or more people at a time. Because they are alive and still growing the bridges actually gain strength over time – and some of the ancient root bridges used daily by the people of the villages around Cherrapunji are well over five hundred years old.

Lum Sohpetbneng or Peak which is 1, 343 m and 20 km from the Capital City of Shillong is regarded as sacred by the Hynniewtrep people and is set amidst a beautiful scenic view against the backdrop of a sacred forest. This ‘Navel of Heaven’ as per Khasi mythology is a heavenly peak which offers to fill the spiritual void and emptiness to those who seek and desire solace and peace of mind.

According to Khasi mythology, Lum Sohpetbneng is an ancient golden staircase linking earth and heaven. This peak is held sacred by the Hynniewtrep tribe. A substantial number of devotees assemble here during the annual pilgrimage, during which several rituals and religious rites are performed. See http://www.culturalpursuits.com/khasi/spiritual_roots.htm

This sacred mountain is kind of similar to the one where the Na’vi hunters have to climb across floating mountains to get to the sacred site where their big birds or tame creatures they call ikran actually live.

But we have to face a massive challenge now as the Central Government of India and State Government of Meghalaya want to cut down 500 ha of virgin forest and mine high grade uranium for nuclear programmes. So while we are trying to protect the rights of our indigenous people to preserve their land and forest, the big state and its state owned Uranium Corporation of India Limited want to destroy our way of living for pure greed and power. I wrote a bit about the nuclear power debate on http://unltdworld.com/blog/view.php?id=158

You can also see the testimonies of indigenous people from around the world on the negative impact of uranium mining on their native lands http://www.wecf.eu/english/articles/2009/12/testimonies-copenhagen.php

Well the epic movie Avatar is about mining for very expensive resource unobtanium that the humans want by destroying the forest where the indigenous people live in a special planet Pandora. But that would be not only be destroying their home but also the rich and sacred resources that exist there. So it was definitely like our own story in Meghalaya, North East India where the government wants to mine high grade uranium by cutting down of our native sacred forests where our indigenous Khasi people live.

So in many ways the challenges faced by our Khasi people in Uranium rich Meghalaya are just like those of the Na’vi people in Unobtainum rich Pandora in the movie Avatar!

If only reality had happy endings like in fictional films! “Avatar” has a wonderful message for humanity, assuming people are willing and able to listen…..

There is a happy turn in the story, however:

Uranium mining blocked
OUR SPECIAL CORRESPONDENT
New Delhi, May 14: A national panel of wildlife experts today rejected a proposal from the department of atomic energy for uranium exploration on the Rongcheng plateau in Meghalaya’s South Garo Hills.

The standing committee of the National Board of Wildlife decided to reject the proposal for exploratory drilling in view of the sentiments of the local people and representations from civil society groups, the environment ministry said.

The Rongcheng plateau falls in the Balpakram National Park, home to elephants, black bear, leopards, deer and the red panda, one of the rarest animals in the world.

Several green groups and NGOs have campaigned against a proposal for exploratory drilling, arguing that it would harm the bio-diversity in the park.