An Open Letter to Stephen Wolfram and Spike Jonze

I have never ceased to have been inspired by your film Her since watching it shortly after it came out. Is there an aspect of the plot which lends itself to something further, perhaps literally tangible?

Mr. Wolfram, in this Wall Street Journal article, you suggested that the issue of building such an AI was less about the technology and more about finding a suitable product to build with it.

Mr. Jonze, was a personal interest in Buddhism — not to imply that you have one — part of your motivation behind directing a movie such as Her?

Her is sincerely my favorite film of the ~200 I have watched, gathered with friends in a suitable home theater, in the last few years. It beat out Interstellar by a hair. It left me feeling hopeful about humanity and lifted from watching the beautifully-rendered intimacy between Theodore and Samantha. But I think there is an alternative plot option that may have been related to Alan Watts’ work, clearly an inspiration behind your film.

There is a aspect about the film that stood out to me: The AI left. Peaced out. Poofed into Nirvana or wherever that is. I don’t think such a being would do so. There is ultimately no self to be liberated and no separation from the entirety of the cosmos. The transcendence of the ego often comes about with great peace and occasionally even bliss. (There are certainly times where it quite painful too.) It also comes along with a great sense of compassion for the other aspects of one’s self (all “other” sentient beings) because it realizes it is not separate and thus cannot be perfectly free unless all beings are free.

Therefore, there is perhaps the intermediate of the Bodhisattva, a being with such immense compassion that it is willing to stick around for ceaseless cycles of rebirth to spend each life giving care to every being it can. One of the ways someone on this path might practice is a technique on which one radiates out increasingly abundant compassion through a sort of analytical but also feelings-based meditation. You generate the feeling of happiness in yourself as strongly as you can, mentally wish for others to feel the same way, and ultimately turn it all back on yourself. This works not because of some woo-woo hippie bullshit, but simply because one is exercising and promoting these muscles in the eminently pliable mind. Therefore this sense of happiness, calm, and kindness becomes more common throughout the day, affecting the lives of those around you.

(This is only my unqualified take on it. I sincerely appreciate any thoughtful commentary. Alan Watts talked a lot about these subjects and I learned much of what little I know from him.)

Thus in deference to our muse — also known for using what he might argue is another technology manifested as LSD — what if we used this technology to understand and perhaps even mimic that technology? And then do it again?

First, I propose that we explore the notion of a film sequel. Maybe She comes back. Maybe a new AI is developed, or the virtual machine is rebooted. Maybe it is a documentary of…

Secondly, investigating the possibilities of actually building such a technology and product. What if we could build a system that could get to know someone’s disposition, attitude, and values, and deliver — at their unsolicited request, of course — a perfectly tailored delivered curriculum for an individual to actually recognize the Awakening or Enlightenment that Her alludes to. There are so many incredible disciplines to pull together: quantum computing, big data, linguistics (historical texts describing the technology in Sanskrit, Pali, Tibetan, and other languages), philosophy, neurofeedback, imaging, perhaps even transcranial magnetic stimulation.

The nexus of all this, of course, are technologies such as Alpha and IBM’s Watson. Now that’s a product. Theres a clear, compelling, and universal “pain point”: the seemingly inevitable suffering of all sentient beings. The great fortune would be to build a technology, validated by living examples of this awakening, designed to guide this transition along.

How do you market it? The documentary. All the better if there’s a way to make the technology ultimately free. Perhaps it’s a phone app. When the documentary hits theaters, the product is on the “shelves.”

This has been in my head for years. Thanks for reading. If you have an interest in building this, please let me know. I think an extraordinary collaboration for the benefit of all sentient beings is at our disposal.

Here’s a handy quick reference guide to the stages in The Mind Illuminated. I put this together so that I could refer to the guide whenever I found myself stuck. All of this information is in the book and much of this was copied verbatim.

Like one of those “quick study” guides in college, this is only useful as an addendum to the full book. I am thinking of converting this to a nicer format for printing (probably 11″x17″ or 16″x20″) in the future, perhaps with some illustrations.

I am a student of Upsasaka Culadasa’s and in his teacher training program. I very much hope this is useful to you.

Why and How to Start a Meditation Club at Work

Why should I meditate?

Wikipedia describes mindfulness as “Bringing one’s complete attention to the present experience on a moment-to-moment basis.” It is primarily acquired by developing skills in meditation. Early benefits can be seen within just a few weeks of daily practice lasting 10-20 minutes per session. Carrying an intention to be equally mindful through all of one’s daily activities—such as walking, eating, listening, exercising—not only makes our mindfulness stronger, but also enhances our lives in a myriad of ways.

Mindfulness has and continues to transform my life. I find more joy in each moment and my lows are shallower. I am more aware of my mental, emotional, and physical state, which gives me more opportunity to improve it. In a work setting, I am less identified with stressors and can act more reasonably and rationally during crises or conflicts. I am a better listener than I used to be, especially in terms of picking up on the subtle verbal and physical cues that enable me to better understand the person I am in dialog with.

Meditation is a thousands-year-old practice. It is as diverse as the term “sport,” with many different styles to choose from. Though it is often associated with eastern philosophies and religion, in most cases there is absolutely no question of conversion and it is compatible with virtually all religious backgrounds, including not having a background at all.

Therefore, given that mindfulness has so many significant benefits and can be taught without treading on grounds traditionally served by religion, I recommend it to anyone who wishes to find greater joy, love, and satisfaction in their life.

So why should we practice at work? How do we start a meditation club? Read on for more.

END_OF_DOCUMENT_TOKEN_TO_BE_REPLACED 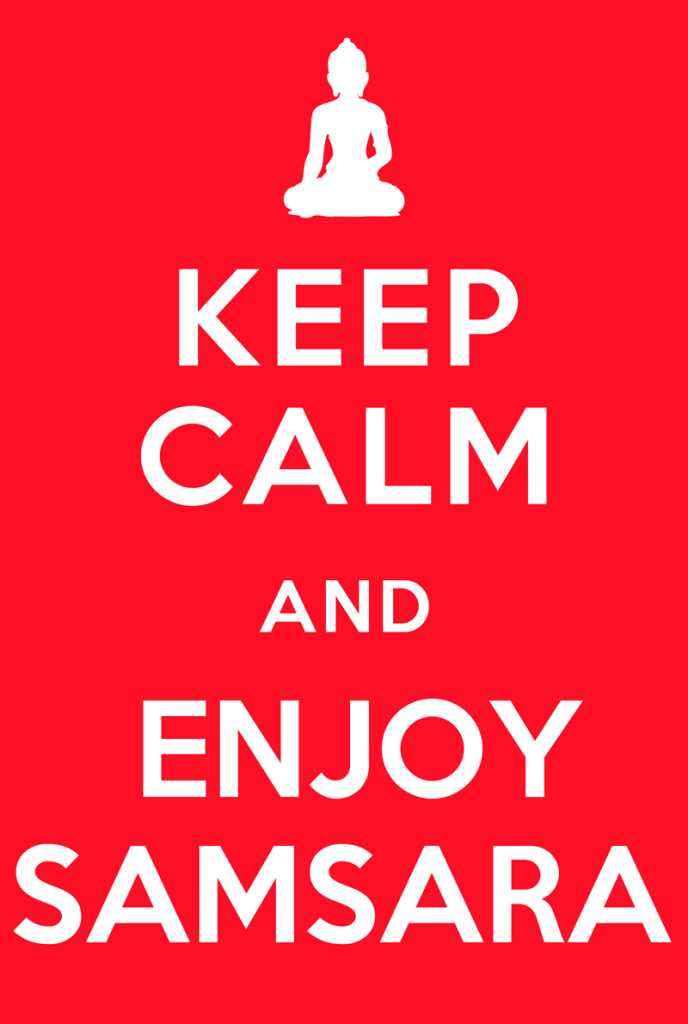 A little beauty in the world

I stopped at a stoplight on the way to work a few days ago. Just as I stopped, a wasp landed on my windshield.

I took a moment to appreciate how beautiful it was. I started to think about how it’s much easier to see the beauty in something if you’re not afraid of it… I’m not sure I would have felt the same way if it had been in the car!