I shot an interview with Adolfo Foronda about building the right product as a product owner. Check it out! Click “Continue reading” below for my speaking notes, which are an approximate transcript.

END_OF_DOCUMENT_TOKEN_TO_BE_REPLACED

On Not Saying No

I shot an interview with Adolfo Foronda about saying “no” as a product owner. Check it out! Click “Continue reading” below for an approximate transcript.

END_OF_DOCUMENT_TOKEN_TO_BE_REPLACED

I recently came across Mark Graban‘s “Highlights from the Original 1984 NUMMI Team Member Handbook” series. Digging through the archives at Ephlin’s UAW office papers were archived at the Walter P. Reuther Library at Wayne State University in Detroit, Mark found some absolutely extraordinary gems, including this one.

Standing on the shoulders of giants, I reached out to the archivists at the library to see if I could get a copy of the full handbook. They cheerfully obliged, and rather quickly at that!

Grab the PDF and peruse for yourself. The first several pages are the most interesting, but even as you explore the rest of it pay attention to how human and reasonable it is. Mark provides an excellent commentary on several key sections, so I’ll try to avoid highlighting the same thoughts. I hope you’ll share your own findings and commentary in the comments below.

Here are some of the gems I’ve found: 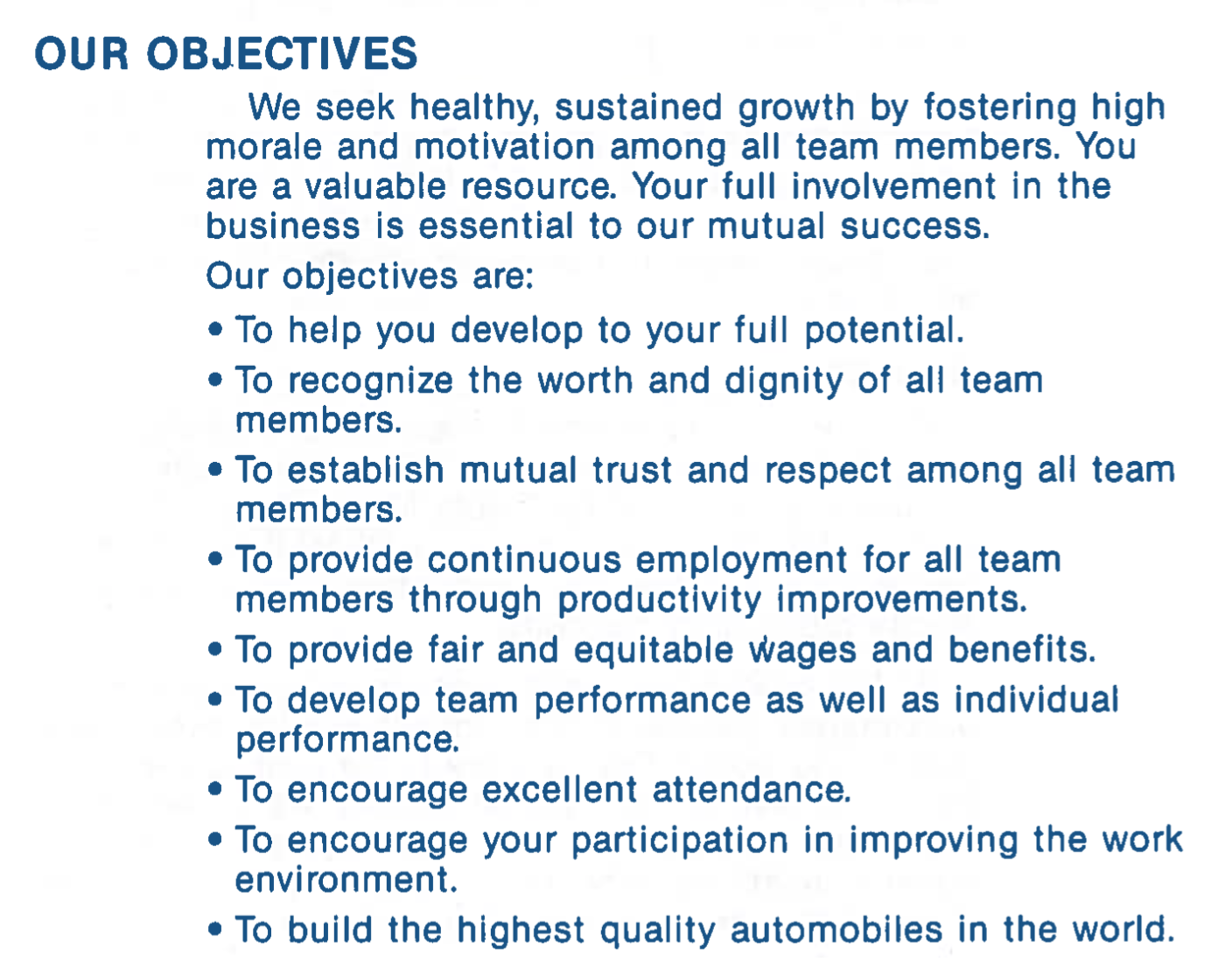 Notice that the first objective is “To help [employees] develop to [their] full potential.” In fact, these objectives start with the individual employee, progress to the company, and then ultimately end with the customer receiving the “highest quality automobiles in the world.” This is a notable inversion from the usual objectives, which usually prioritize stakeholders and customers, then the company, then—if at all—the individual employee.

This is extraordinary in two ways. First, employees are given the expectation that they are going to have a greater autonomy and influence over how other aspects of the organization operate. I’ve heard the statistic that Toyota’s 300,000 global employees make a total of one million suggestions annually, 97% of which are implemented. Secondly, note that the employee handbook is characterized as helping the employee “do [their] job better,” a far cry from the usual purpose of this kind of handbook (protecting the company’s interest).

END_OF_DOCUMENT_TOKEN_TO_BE_REPLACED 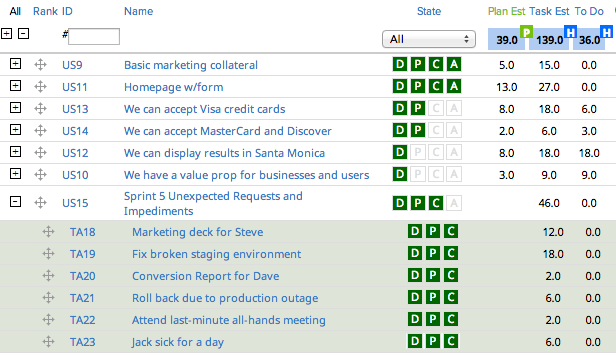 Congrats to the StubHub Labs team!

I’ve been coaching the StubHub Labs team on Agile, Scrum, and Kanban principles and practices since last July ’13. They got a nice shout-out on eBay’s corporate blog yesterday…

END_OF_DOCUMENT_TOKEN_TO_BE_REPLACED

One of the things that I think holds Scrum teams back from being successful is that they often learn about the Scrum process but don’t learn about Agile culture or infrastructure. Because Scrum is a system that relies on all of it’s parts, failure to master Agile culture and infrastructure means that companies will also fail to master Scrum. This failure is unbelievably costly for companies and teams: “average” teams deliver only a 35% improvement over Waterfall, while properly coached teams deliver 300-400% improvements. I’ve seen this myself in my time working with Scrum teams at Atomic Online: once a team got properly coached and running, we were at least 3-4x as fast as when we started. This is rare, too: I have not yet worked with a team that has outperformed the teams I worked with at Atomic Online.

I think we owe it to ourselves as members of Scrum team to learn about and embrace Agile principles. This is hard to do without a “sensei” (a well-experienced Agile leader) who can can conduct gemba walks with incumbent leadership to bring about organizational transformation. In lieu of that, though, here are some resources that I hope can help to at least illustrate the difference between a true Agile/Scrum/Kanban environment and a waterfall environment that has adopted a few Scrum processes.